Join New Voices Pittsburgh for the You Wouldn't Expect play* in partnership with demaskus Theater Collective during Women of Color HERStory Month® 2016, Saturday, March 26, 2016, at the August Wilson Center for African American Culture. There will be two performances that day 2 pm and 8 pm, as we spotlight the true events of the 8,000 women forcibly sterilized under a North Carolina Eugenics Program--this is their story.

This production is made possible through the generous support of The Heinz Endowments and The Pittsburgh Foundation.

You can purchase tickets to the play here: You Wouldn't Expect: Performances! 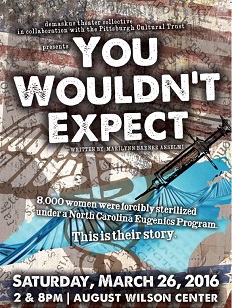 SPECIAL EVENT: Dinner & Panel Discussion with demaskus Theater Collective and New Voices Pittsburgh’s Women of Color HERStory Month® 2016, 5:30 PM - $10. (Ticket to the dinner and panel discussion does not include admission to the play).

In addition to the play, audience members are invited to dine and discuss the reproductive and social justice implications of the United States eugenics program before the closing 8 PM showing of You Wouldn't Expect it.

Mollie Rebecca
Sorry, this event is sold out.